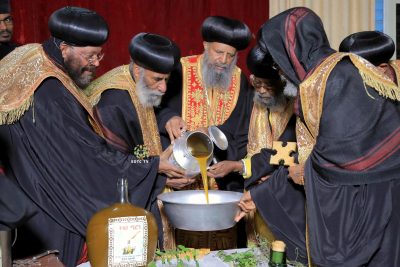 Ethiopia: November 6, 2022, on the Feast Day of the Savior of the World, the Holy Synod of the Ethiopian Orthodox Tewahedo Church consecrated Holy Myron after His Holiness the Patriarch and the Archbishops of the Church had prepared it over a period of seven days.

His Grace Abune Dioscoros, Archbishop of Maichew, Southern and South-Western Tigray, who was placed in charge of the preparation of Holy Myron this year, has issued a warning that the commercial sale of Holy Myron in stores is strictly forbidden and that doing so is considered an offence against the Holy Spirit whose blessings are not for sale.  He has advised that the clergy make all the faithful aware that the commercial sale of Holy Myron is forbidden, and that it can be obtained legitimately for local churches through their local diocese or from the Patriarchate.

In the Old Testament book of Exodus, chapter 30 from verses 22 to 25, the Lord spoke to Moses and instructed him to take certain aromatic spices and to mix them with olive oil to make a fragrant, holy anointing oil. Among the spices named in Exodus are myrrh, cinnamon, calamus, and cassia. It was to be used to anoint the sacred vessels of the Tabernacle and later the Temple, and for anointing Priests. The ancient Prophets of the Old Testament and the Kings of Israel were also anointed.

Although the early fathers and scholars mention the use of Holy Myron, the earliest account of its history is documented by Abu al-Barakat Ibn Kabar, a 14th-century Coptic Priest and scholar, in his book the title of which translates, “The Lamp of Darkness in Clarifying the Service”. According to his account, the holy Apostles took from the spices that were used to anoint the body of our Lord Jesus Christ when he was buried (cf. John 19:38-40), added pure olive oil to it, and prayed over it in the Upper Room of Zion, the first Christian church, which was in the house of St. Mark the Evangelist in Jerusalem. This is the same room where the Last Supper was held, which established the rite of the Holy Liturgy, and where Christ washed the feet of His Disciples. It is also where the Holy Spirit descended upon them from Heaven on the fiftieth day after the Resurrection, the Feast of the Paraclete. There are approximately twenty to thirty different spices that are mixed into pure olive oil and cooked over a low heat while stirring. This may need to be done several times, typically two to four, in order for the oil to have a certain consistency. The Holy Synod of the Ethiopian Orthodox Church has just conducted this ceremony over seven days, culminating on the Feast of the Savior of the World on Sunday, November 6, 2022.

Because Holy Myron must be prepared by the Patriarch, Archbishops and Bishops of the Church at certain limited times, it must be made in large quantities to last a long time.  For almost 1700 years, as Ethiopia received her Bishops from the Coptic Patriarchate of Egypt, she was also dependent on the Coptic Church for Holy Myron.  This caused great difficulties in those periods when it was difficult to receive it from Egypt due to the distance, and the many problems that arouse over the centuries.  Even after Ethiopia received her own native synod, Archbishops, and later Patriarchs, the Church continued to rely on the Coptic Church for Holy Myron and would send Ethiopian Bishops to participate in its preparation in Egypt and to bring back with them a portion. It was a significant milestone in the history of the Ethiopian Orthodox Tewahedo Church when its Holy Synod prepared the Holy Myron for the first time during the reign of the late Patriarch His Holiness Abune Paulos in 1998. It was prepared for a second time during his patriarchal reign in 2002, and has now been prepared for the third time in the history of the Church during the patriarchal reign of His Holiness Abune Mathias, Patriarch of Ethiopia, Archbishop of Axum and Echege of the See of St. Tekle Haimanot. The fact that the peace agreement halting the bloody northern war in Ethiopia occurred during the preparation of this most holy instrument of the Church is more than a coincidence for many of the faithful.  May God be praised in all things.