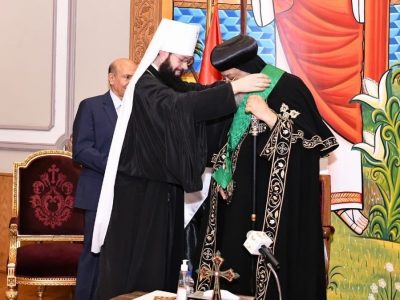 Cairo – Egypt: The Russian Orthodox Church Awarded the “Glory and Honor Ist Degree” Medal to Pope Tawadros II of the Coptic Orthodox Church on 07 November 2022. The awarding of the medal was held during the visit of Metropolitan Anthony of Volokolamsk, Chairman of the Department for External Church Relations of the Moscow Patriarchate to Egypt.

The highest award was awarded on the occasion of the tenth anniversary of his Enthronement as Pope and his 70th birthday for His Holiness’ efforts in working on relations between the Coptic and the Russian Churches.

From the side of the Russian Orthodox Church, the meeting was attended by those accompanying Metropolitan Anthony on a trip to Egypt: Hieromonk Stefan (Igumnov), DECR Secretary for Inter-Christian Relations, and Priest Alexander Yershov, Assistant to the DECR Chairman.

The Medal of “Glory and Honor” was founded in 2004 by the decision of the Holy Synod of the Russian Church headed by His Holiness Late Patriarch Alexy II, the Late Patriarch of Moscow and All Russia, and it is the second oldest Medal of the Russian Orthodox Church. The naming of the Medal came from St. Paul’s Epistle saying: “glory, honor, and peace to everyone who works what is good” (Romans 2:10).
It is awarded to Heads of State and Government, Heads of International Organisations, Heads of Churches, and to Public Figures for their contribution towards relations between Churches and Religions, to promote peace and friendship among people.

During the Egyptian visit, the DECR chairman also visited many churches and sacred sites as part of his two-day visit to Egypt.