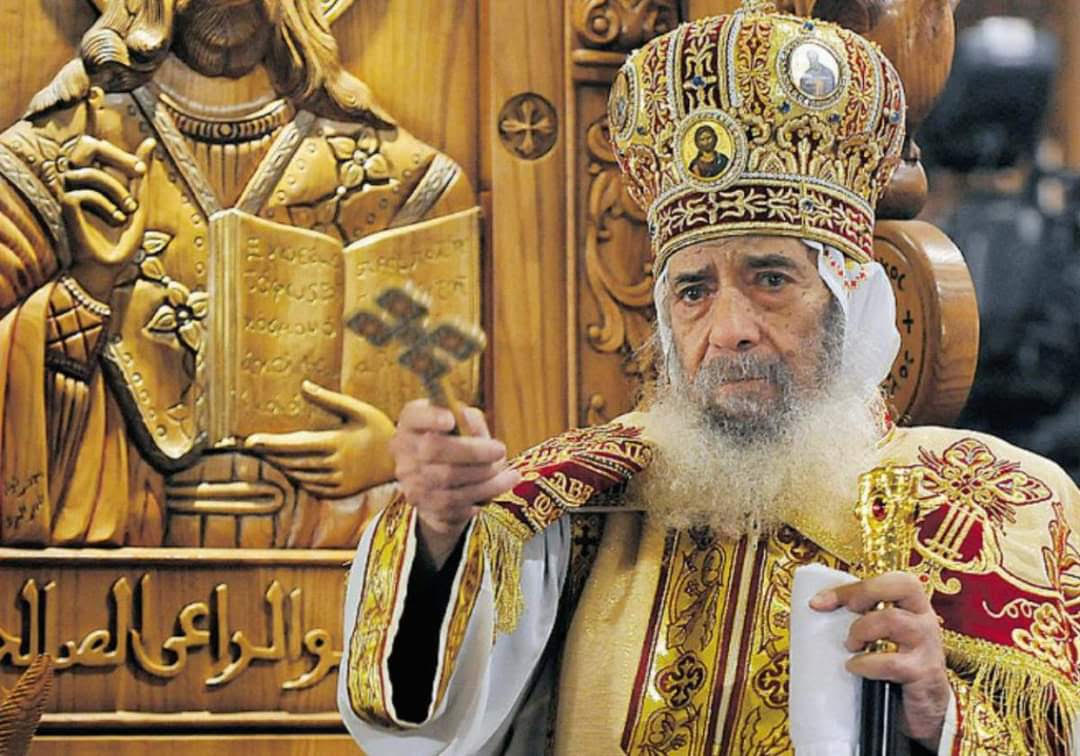 Cairo-Egypt: The Coptic Orthodox Church celebrates, these days, the tenth anniversary of the demise of the late Pope Shenouda III, Pope of Alexandria and Patriarch of the See of St. Mark. He served as the head of the Coptic Church from the 3rd of August 1923 to the 17th of March 2012.

He moved to Damanhour, where he studied at the Copts Primary School, then at the American School in Benha.
He moved with the family to Cairo and lived in the Shubra neighbourhood, where he studied at Al-Iman Secondary School, where he won the admiration of his teachers for his excellence and gentleness. He joined Fouad I University, in the Department of History, and began studying Pharaonic and Islamic history and modern history, and obtained a BA with grade (excellent) in 1947. In his final year at the Faculty of Arts, he joined the faculty clerical. Three years after obtaining his BA, he graduated from the seminary and worked as a teacher of Arabic and as a teacher of English. He attended evening classes at the College of Coptic Theology and was a student and professor in the same college at the same time.

He loved writing, especially writing poems, and for several years he was an editor and then editor-in-chief of the “Sunday Schools” magazine, and at the same time, he was pursuing his postgraduate studies in ancient archaeology.
‏He was an active person in the church and was a servant in the Sunday Schools. Also served as an officer with the rank of lieutenant in the army. He retreated in his cell inside the monastery and left it to another in the garden outside the monastery, which he left after that. God guided him to the cave of one of the saints, about 12 kilometres away from the monastery, and weeks passed by him in which he did not see a human face, and it was an opportunity to be alone with God, reading, meditation and study And saturation with the words of the fathers. ‏He was ordained a monk in the name of Anthony the Syriac on Saturday, July 18, 1954. His Holiness said that he found in monasticism a life full of freedom and purity. From 1956 to 1962, His Holiness lived a life of solitude. A year after in his congregation, he was ordained a priest and spent 10 years in the monastery without ever leaving it. He worked as Private Secretary to His Holiness Pope Kyrillos VI in 1959. He was ordained bishop of religious institutes and ecclesiastical education, and was the first bishop of Christian education and dean of the seminary, on September 30, 1962. On March 9, 1971, AD. the Holy Synod met under the leadership of Bishop Anthony, to choose the new patriarch. Many times the discussion dragged until the opinion settled on the selection of five of the total candidates, among whom the elections took place. Makari. The structural lottery was held on Sunday, October 31, 1971 AD, and Divine Providence chose Bishop Shenouda to be the 117th Pope of Alexandria.

During the reign of His Holiness, more than 100 bishops and general bishops were ordained; including the first bishop for young people, more than 400 priests and an unlimited number of deacons in Cairo, Alexandria and the churches of the diaspora. His Holiness paid special attention to serving women in the Coptic Orthodox Church. His Holiness’s love for the life of monasticism led to its revival in the Coptic Church, where hundreds of monks and nuns were ordained during his reign. He was the first patriarch to establish many Coptic monasteries outside the Arab Republic of Egypt and reconstruct a large number of monasteries that had disappeared. The monastic movement also extended to the diaspora, and His Holiness took care of the first monastery in the diaspora,  in the wilderness of California, and sent some monks to rebuild it until the Holy Synod recognized it in the year 1993 AD. Amer monastery in the wilderness of California, and also His Holiness opened two other monasteries in Australia and a monastery in Germany, and another in Africa. He represented the Church in the Theological Dialogue between the Eastern Orthodox Churches and the Catholic Church in September 1971 AD, which was organized by the Pro Oriente group, and developed a formula of faith agreed upon by both parties. During the period of his episcopate of education (1962 – 1971 AD), he travelled to many dioceses at the invitation of their bishops to give lectures and sermons which sometimes extended for a whole week.

Awards and Honors
Received the “Maddenset Singh Award for Tolerance” organized by: the United Nations Educational, Scientific and Cultural Organization (UNESCO) for the year 2000 AD.
He received the award for the best Christian preacher and teacher in the world (1978 AD) from the American Browning Institution.
Sash of the President of the Republic of Hungary and the Hungarian State Medal (August 2011).
He received the Human Rights Award from Libya (2003).
He was awarded the German Augsburg Peace Prize (2011).
Received the Grand Cross of Saint Ignatius from the Syriac Church (2011).
Received the Diamond Award from the Cardinal King Catholic Foundation in Vienna, Austria (2012).

Major Consecrations
He ordained the first patriarch of Eritrea, Abouna Philip the First, on Saint Mark’s Day on May 8, 1998 AD.
His Holiness seated him in person in the Eritrean capital, Asmara, on May 29, 1998 AD.
His Holiness also ordained Abouna Antonios I, Patriarch of Eritrea, and the ordination rites took place in the capital, Asmara, on April 25, 2004.
He consecrated Holy Chrism seven times (six times for the Coptic Church: in April of the years 1981 AD, 1987 AD, 1993 AD, 1995 AD, 2005 AD, and 2008 AD) and once for the Eritrean Church (in September 2004 AD), the first time in its history

Relics of Athanasius
The relics of St. Athanasius, the 20th Patriarch, was brought to Egypt on May 10, 1973 AD under his leadership.