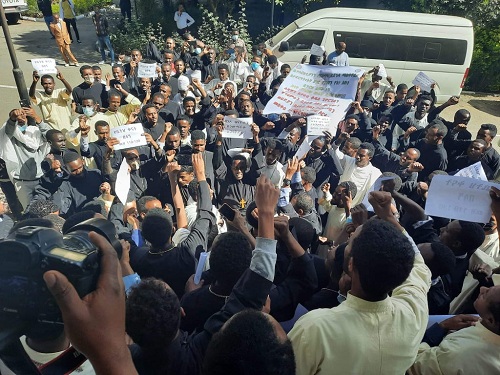 Addis Ababa-Ethiopia: Extremist Islamist and Protestant groups have urged to seize land and squares that the Orthodox Church uses for public processions in Ethiopia. A Protestant Pastor (Apostle Zelalem Getachew) urged “We will take over Meskel Square” in a recent public speech. The speech was given a green signal by Adanech Abebe, the Mayor of Addis Ababa.

Tear gases and smoke bombs were fired at the Orthodox faithful Sunday of St. Stephen Church by the city Police in connection with the preceding incident. Orthodox journalists who covered the event were also arrested and jailed.

Students of Holy Trinity Theological College held a protest and hence the Church called for an emergency Synod session to discuss the recent ‘gesture’ from the Mayor of Addis Ababa that offended the Orthodox Church.

As reported earlier, Abune Mathias, the Ethiopian Patriarch was admitted to the hospital on the day of an emergency session. hence the meeting has been postponed.

On January 11, 2022, the ancient Chobi Debre Medhanit Holy Savior Monastery (in the district of Chobi, in the Western Shewa Zone of the Oromia Regional State) was destroyed by the Oromo Liberation Front or the OLF militia.