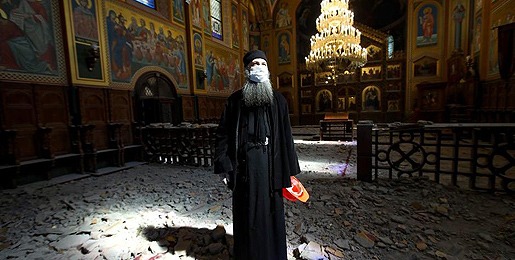 The best photo in Croatia in 2020: Patriarch in a ruined temple

The Patriarch said in the explanation of the award: “Natural forces, unlike human beings, do not choose their victims, neither by their social status nor by religion,”

On World Press Freedom Day, May 3, 2021, the Croatian Journalists’ Association awarded annual prizes for the best journalistic achievements in 2020. The Nikša Antonini Award for the best newspaper photography was given to the extraordinary work of Boris Ščitar, the photographer of Pixel. The photo was taken on March 28, 2020, six days after the devastating earthquake that hit the Croatian capital.

According to the explanation of the jury published on the CJA website, the photo reporter of the Pixel agency Boris Ščitar entered one of the destroyed buildings, the Serbian Orthodox Church of the Transfiguration of the Lord at Cvjetni Square and “immortalized an impressive moment” – while then Metropolitan Porfirije (Perić) of Zagreb-Ljubljana was examining more than 300 square meters of damaged frescoes ”.

“Apart from the fact that the photograph was taken according to compositional and technical rules, with play with daylight and naturally created shadows, it shows the enormous scale of the damage.” The explanation of the award ended with the Patriarch’s message, which the jury recognized as a message of photography that “natural forces, unlike human beings, do not choose their victims, both by their social status and religion.”