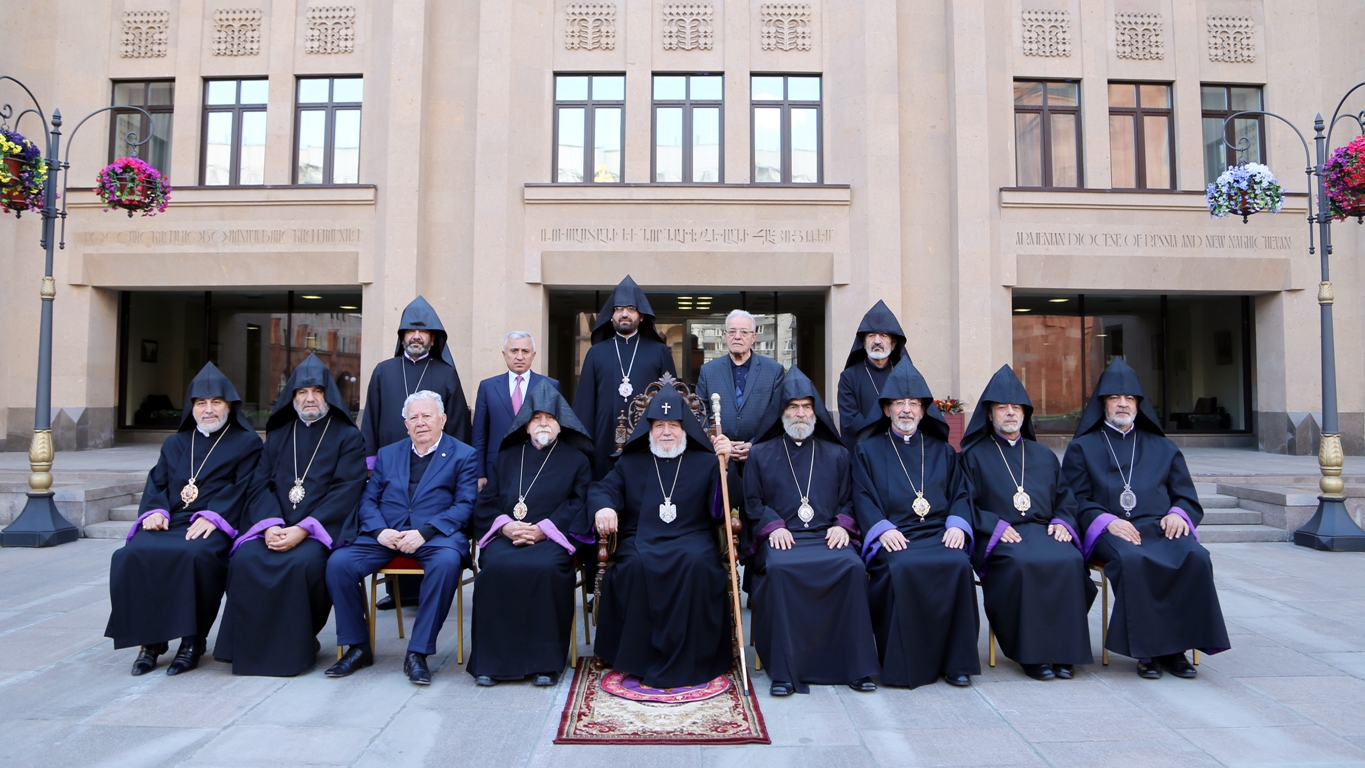 Mother See of Holy Etchmiadzin – May 2017

On May 17 and 18, under the presidency of His Holiness Karekin II, Supreme Patriarch and Catholicos of All Armenians; the Supreme Spiritual Council continued its work at the headquarters of the Armenian Diocese of Russia and New Nakhijevan in Moscow, Russia.

Chairing the meeting sessions was His Eminence Archbishop Hovnan Derderian, Primate of the Western Diocese of the Armenian Church of North America.

During the meeting, the Supreme Spiritual Council discussed the Constitutional Project of the Armenian Church National-Ecclesiastical Assembly. The current constitution for the assembly has been in use since 1945. A report was presented by Mr. Gevork Danielyan, Chairman of the Constitutional Charter Drafting Committee and Doctor -Professor of Legal Sciences. Reviews were also made by His His Grace Bishop Arshak Khachatryan, Chancellor of Mother See and member of the Committee.

Following a detailed examination, the Supreme Spiritual Council accepted the report of the completed works and with the blessings of His Holiness, advised the committee to submit the draft during the Armenian Church Representative Assembly which will be convened in June.

A report was submitted by His Eminence Archbishop Nathan Hovhannisyan, on the preparation of the convening of the Armenian Church Representative Assembly from June 6 to 9 in the Mother See of Holy Etchmiadzin. The SSC members expressed their appreciation for the work that has been completed and also made changes they want implemented.

Reflecting on the behavior displayed by His Eminence Archbishop Aram Ateshyan in this process, the Supreme Spiritual Council found it necessary to exhort him, guided by the rules and regulations of the Armenian Church, to support the Patriarchal Vicar and take the necessary steps for the restoration of normal life of the Patriarchate.

The SSC also discussed programs associated with the celebrations of the 2018 Youth Year. In 2016, during the SSC meeting held in New York, it was decided to declare 2018 as the Year of Youth.

His Eminence Archbishop Hovnan Derderian submitted a report about the completed activities. It was noted that in 2018 youth gatherings and events are planned in separate regions. With the participation of youth from the dioceses around the world, a three-day pilgrimage will be organized to Armenia and the Mother See of Holy Etchmiadzin in July 2018. The three-day gathering will conclude with a Divine Liturgy.

Giving a brief historical overview on the establishment of the Armenian Diocese in Russia, Archbishop Yezras presented the current activities of the diocese. During the leadership of Archbishop Yezras, 83 parishes were registered in the Diocese, the number of churches increased from 7 to 41, and the number of priests increased from 8 to 34. 15 churches are under construction, of which the opening ceremony and anointing for 9 is expected to be held in 2017, as part of the events for the 300th anniversary of the founding of the Diocese.

Archbishop Yezras reflected on the spiritual- cultural life of the Diocese, to which greatly contributed the consecration of the Holy Transfiguration Church of Moscow in 2013 and the opening of the church complex. Within the framework of spiritual-promotional activities pilgrimages are organized to the Headquarters of Moscow Cathedral and different communities, also spiritual discussions are organized.

The Armenian Studies Center contributes to the scientific-cultural life of the Diocese, which regularly organizes conferences, book presentations and lectures. The Ark Museum and a modern equipped library were opened. 4 bilingual monthly newspapers are published in Armenian-populated cities, and more than two dozen books have been issued.

Focusing on education and Armenian subjects, the secondary school N 259 is operating in St. Petersburg, and more than 3,000 children attend 18 Youth Centers, among which there are various study groups. 8,000 Armenians were educated in the Youth Center of Moscow during the past 10 years. The Youth Center was established in 2006. In the near future the St. Gregory of Narek Gymnasium will be opened in Moscow’s church complex area, also kindergarten- educational center will be built. His Eminence Yezras informed that youth associations are operating in all parishes, and meetings are organized with Armenian students studying at universities of Moscow.

It was noted that the Diocese participates in charity projects both in the Homeland and beyond its borders, and provides great assistance to Artsakh. There are social aid and free legal counseling departments in the complex. The services are available not only to Armenians, but also to non-Armenians. Two medical institutions were established – a dental clinic in St. Petersburg and Medical Center in Moscow, where free services are provided to those in need.

The Supreme Spiritual Council members accepted the report with gratitude, expressing their appreciation for the various patriotic programs implemented by the Diocese. The SSC members asked God’s support to His Eminence and the clergy in their dedicated and beneficial service.

The meeting was concluded with the blessings remarks of His Holiness Karekin II.