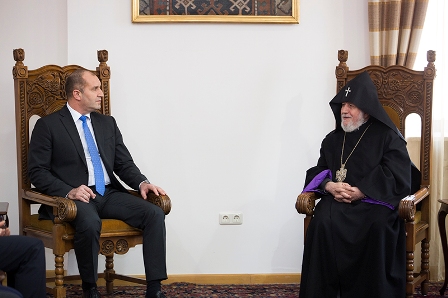 On February 13, in the Mother See of Holy Etchmiadzin, His Holiness Karekin II, Supreme Patriarch and Catholicos of All Armenians; received Mr. Rumen Radev, President of the Republic of Bulgaria and his wife Dessislava Radeva. They were accompanied by Mr. Edward Nalbandyan, Minister of Foreign Affairs of the Republic of Armenia.

His Holiness welcomed the Bulgarian President’s visit to Armenia and Mother See of Holy Etchmiadzin, and noted that it would become a new impetus for the expansion of bilateral cooperation between the two countries in different spheres. The Catholicos of All Armenians stated that the historic close Armenian-Bulgarian ties dated back to the Middle Ages, and was a solid base for the further development of cooperation. The Armenian Pontiff emphasized the role of the Armenian community in Bulgaria in that development.

The Catholicos of All Armenians also expressed his appreciation to the Bulgarian authorities for the caring attitude shown towards the Armenian community and the Armenian Diocese, which gives an opportunity to the historical Armenian community of Bulgaria to live freely in their spiritual-national life and be an integral part of Bulgarian society. His Holiness noted that he personally witnessed this during his pastoral visit to Bulgaria.

President Radev, expressed gratitude to His Holiness Karekin II for the reception and opportunity to visit the oldest Christian sanctuary, and spoke on the results of his visit to Armenia and his impressions. The Bulgarian President noted that the visit opens good perspectives for expanding Armenian-Bulgarian relations.

President Radev referred to the historical similarities of the two nations, highlighting the role of the Church in the development and formation of the national identity, education and culture. Speaking on the Armenian community in Bulgaria, the President underlined that it has its own unique image, is fully integrated into the public life, and that Armenians are in the leading positions in culture and other spheres.

At the conclusion of the meeting, His Holiness wished the Bulgarian President a fruitful service for the vibrancy of Bulgaria and for the welfare of her pious people.

The official delegation led by the President of the Republic of Bulgaria visited Mother Cathedral and toured the cathedral museum and learned about the ecclesiastical and cultural treasures of the Armenian Church.