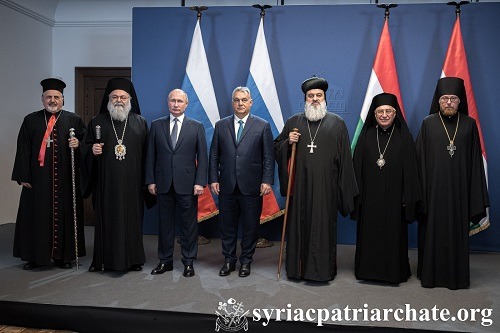 On October 30, 2019, following the invitation of His Excellency Mr. Viktor Orban, Prime Minister of Hungary and in his presence, His Holiness Patriarch Mor Ignatius Aphrem II met His Excellency Mr. Vladimir Putin, President of Russia, at the Buda Castle in Budapest.

His Holiness thanked Hungarian Prime Minister Orban for the support of Hungary for the Christians in the Middle East, especially in Iraq and Syria, through the support of the local churches and the projects that aim at strengthening the Christian presence in the Orient.

His Holiness also thanked Russian President Vladimir Putin for the positive role of Russia in Syria, especially in fighting terrorism through military intervention to preserve the unity of the Syrian territory. His Holiness pointed out that it is necessary to continue the support by offering humanitarian aid to the internally displaced and those affected by the crisis in Syria. He appreciated the humanitarian cooperation with the local churches, offered by the presidential committee in collaboration with the Russian Orthodox Church.

His Holiness hoped that the case of the two abducted Archbishops of Aleppo Boulos Yaziji and Mor Gregorius Youhanna Ibrahim would receive more support from the international community in order to have their safe return to the Archdioceses in Aleppo. His Holiness also pointed out that the sanctions imposed on Syria need to be lifted because they are increasing the suffering of the Syrian people and negatively affecting the economy in Syria.