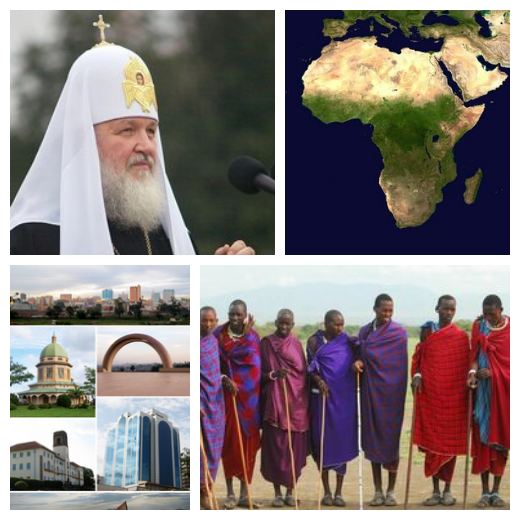 Kampala-Uganda: On December 29/12/2021, the holy synod of the Russian Orthodox Church at its session made a decision to form the patriarchate Exarchate of Africa. Metropolitan Leonid(Gorbechev) was appointed as the Patriarchal Exarch. The synod has approved the formation of two dioceses namely the South African Diocese, which will have 24 countries under its jurisdiction and the North African Diocese which will have 31 countries.

The Russian Federation and the Russian Church in Africa
The Russian Federation is strengthening its own positions in the region, building complex interactions with African states not only through military-technical, cooperation, but also in the cultural, educational, and now in the religious spheres. Russia is strengthening its positions on the continent in a number of areas, which is especially noticeable in the Central African Republic where Russians are very popular with the residents. The creation of the Exarchate of the Russian Orthodox church in Africa, these are only the first step. The Russian Orthodox Church will support the population of Africa with humanitarian aid and vaccines in addition to spiritual patronage, as they are already ready to send a batch of coronavirus vaccines.

Russian Church to Provide Basic Amenities to African Orthodox Clergy
Education of the Patriarchate of Africa is a historical event without exaggeration, and the tasks are relevant.The Russian Church will oversee The spiritual nourishment of believers, as well as humanitarian support for the African faithful in the form of basic living conditions, infrastructure, medical assistance. The Church will also ensure that Christian rights are granted to its faithful in the continent, according to Bishop Leonid. He also clarified that first of all, the clergy will be provided with everything necessary to perform worship services; formations, clouds, vessels, literature in the native language for the believers.

Goodbye Greeks
Africa should say “Goodbye Greeks,”. The Russian church comes to Africa only because the church of Africa is now administratively young and the Greeks did not allow her to enter into force. There is a call for the Russian Orthodox church and friendly churches like the Orthodox Church of Serbia and others to lend a helping hand and support the growth of the African Church.

“We are not Happy with the Greek Orthodox Leadership, and Tribalism in Uganda, and in Africa. We Need Help” – Ugandan Orthodox Christians

Africa is African
After all, even a child understands that AFRICA is African. Of course, at the words, “Church of Africa” any person will expect the faces of African hierarchs and the head of the church with a certain appearance. Africa is in our minds, but we don’t forget the homeless, according to Fr George. A total of 102 clerics from the Alexandria Patriarchate was received under the care of the Russian Patriarchate on 29/12/2021.

African-Ukrainian Issue and Threats
The decision to create an African Exarchate of the Russian church will leave the Alexandria Patriarchate without a pasture. Several African priests have moved to Moscow Patriarchate. In Alexandria, there are only Greeks left who wants to humiliate orthodox Africans. Priests who did not recognize the Orthodox Church of Ukraine were expelled not only from temples but also from houses. African priests are threatened with defrocking for moving to the Russian orthodox church in Kisumu Diocese in Western Kenya. African Dioceses calls on clergy to renounce the decision to join Russian Church. It is the Greek Patriarchate that threatens all priests in Africa who want to join the ROC.

Why Exarch of Africa
The Greek hierarchy urges them to sign a declaration of refusal against their desire to join the ROC because of Archbishop Leonid’s, travel to Africa to meet with representatives of the clergy in Tanzania. Based on the results of a thorough study of the applications received from hundreds of clerics of the African continent (from eight countries) an appeal was made to Patriarch Kirill of Moscow and all Russia. As a result, it was decided to create an Exarch in Africa. In December, the Russian church received several rude and impudent letters from the bishops of the Alexandria Patriarchate. In one of the letters, it was written “Our priests do not know even where Ukraine is located.”

One of the primates of local churches said: “We don’t want to solve the problems of Ukraine and create problems for ourselves”. The Alexandrian Patriarchate tried to take part in resolving the issue to an extent. The Patriarch of Constantinople on the other hand accuses the Russian church of ingratitude, recalling that the orthodox faith reached Russia from Constantinople. Greeks are the ones who feel depressed by the decision of the African clergy and faithful to join the Russian Church, they are trying to threaten us but all remain in vain.

Response from Alexandria
The Alexandria Patriarchate convened a synod from 10-12/Jan/2022, and the hierarchy of the Alexandrian throne expresses its protest to the patriarch of Russia, for the irregular, establishment of an Exarchate within the boundaries of the Patriarchate of Alexandria. The Alexandrian Patriarch was quoted saying: “African missionaries are fed by us like an infant is fed with milk and not alone for solid theological food.” The synod ended with the creation of a new Diocese in Uganda (the diocese of Jinja and All-Eastern Uganda under Bishop Kisitu Silvester) and Nectarios Kibuye was elected as the Bishop of the Gulu diocese.