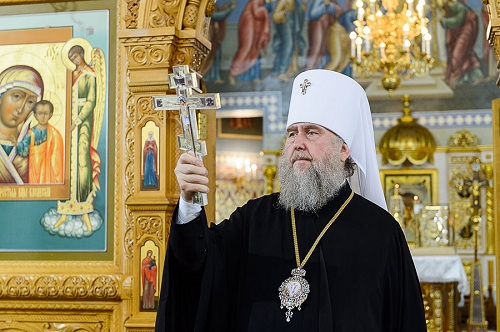 Almaty-Kazakhstan: Metropolitan Alexander of Astana and Kazakhstan has urged for peace and stability in the nation in response to the fierce protests over fuel prices across several cities.

Metropolitan Alexander in his appeal stated that “I appeal to all of you – show wisdom and prudence, do not succumb to any provocations from inside and outside. Anyone who incites conflicts and sows internecine strife, who pushes people to trample the Law and bloodshed, takes on the soul the gravest sin. Only the devil can celebrate victory when brothers are at enmity, destroying each other, injuring, weakening the vitality of the people. I appeal to everyone on whom decision-making depends: stop the hostile confrontation, enter into real negotiations to establish peace and justice. In internecine strife there can be no winners, there can be no political gains that would be dearer than people’s lives. In our hands today is the well-being of our native Kazakhstan and the place of our country in the modern world. I call on all believers of the Orthodox Church to pray for peace and the prevention of any civil strife in our land”.

The government has resigned in response to the protest and a state of emergency has been declared in Almaty and the oil-producing western Mangistau province.