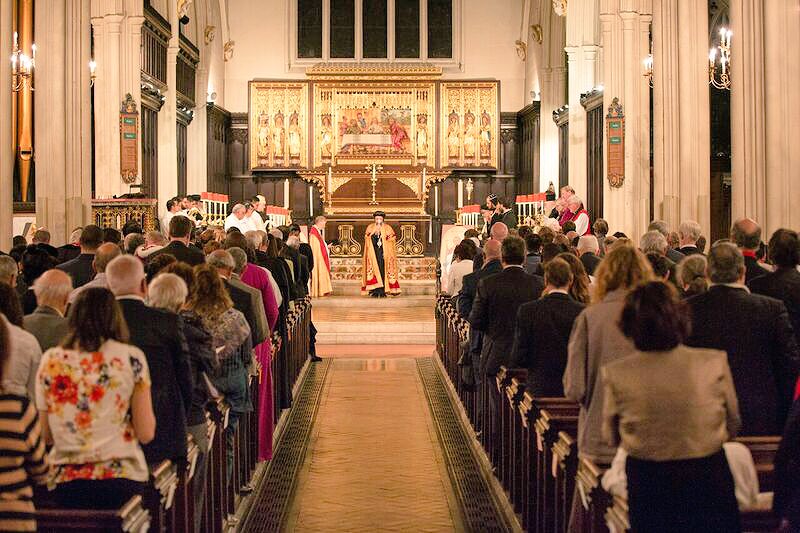 Messages from Her Majesty The Queen, HRH the Prince of Wales, the Archbishop of Canterbury and the Prime Minister at the annual Coptic New Year (Nayrouz) Service at Westminster Abbey

Messages were received from Her Majesty The Queen, His Royal Highness the Prince of Wales, the Most Reverend Archbishop Justin Welby, Archbishop of Canterbury, and the Right Honourable Theresa May, Prime Minister, as equality and freedom were highlighted at the annual Coptic New Year (Nayrouz) Service at St Margaret’s Church, Westminster Abbey. Addresses were also delivered by the Lord Bourne of Aberystwyth, Minister for Faith, and the Lord Alton of Liverpool.

Members from the House of Lords and House of Commons, the Diplomatic Corps, the Foreign Commonwealth Office, the Home Office, and humanitarian and advocacy organisations, as well as various ecumenical and inter-religious guests, joined members of the Coptic Orthodox community in the United Kingdom for this annual celebration. The service commenced with a welcome by the Reverend Canon Jane Sinclair, Canon of Westminster & Rector of St Margaret’s.

In his sermon, His Eminence Archbishop Angaelos, Coptic Orthodox Archbishop of London, said:

“Today we gather to celebrate a new beginning; a new year. Today is a day for rejoicing in the creation of our God, because through it, we see that He is a God of equity; a God of equality. He is a God Who creates all according to that spirit of fairness.

Yesterday was the International Day for Indigenous Peoples. How ironic as we now look upon tens of millions who are displaced, no longer in their indigenous lands. No longer in their ancestral places because of war, conflict, persecution or poverty.

The Feast of Nayrouz commemorates martyrs historically, but it is also a time at which we remember those who have paid the ultimate price more recently. Over the past 2 years we have experienced the bombing of numerous churches, the shooting of innocent worshippers, targeted attacks on churches and Christians in villages across Upper Egypt, and an attempted suicide bombing only weeks ago. Today also marks the seventh anniversary of innocent Christians brutally massacred in Maspero, Cairo.

The beauty and irony of this situation however, is that without darkness there is no need for light, and so if we celebrate light today, it is because it breaks darkness. Our gathering here is light, with people coming together, representing a variety of ages, ethnicities, cultures, religions, a variation of humanity; a broad spectrum of our British society and our British Coptic society within that.

The celebration of this new year represents our Christian understanding that whatever wrong we may have committed, either personally or corporately, it can be corrected through repentance and a changing of our course. We must therefore, personally and collectively, take stock of where we have erred, repent, and move forward with what Saint Paul refers to as the “renewal of [our] minds.” This epitomises our Faith that there is always hope beyond desperation, and life beyond the Cross.”

Following prayers for the safety and unity of the Church and wider society, a message from Her Majesty The Queen was read by the Right Reverend Michael Langrish, in which she wrote:

“As you commemorate the faithful witness of countless people who have paid the ultimate price for their Christian Faith, I send my best wishes to your community for a peaceful year ahead.”

In a message addressed to Archbishop Angaelos from the Most Reverend Archbishop of Canterbury, read by the Right Reverend Andrew J Proud, Bishop of Reading, he said:

The Right Honourable Theresa May Prime Minister provided a message read by the Lord Bourne of Aberystwyth:

“Nayrouz is a time for gratitude and reflection as you gather together to mark this yearly event. It provides the chance to commemorate those who have made the ultimate sacrifice for their beliefs, at a time when it is important to remember that minority faith groups continue to face persecution in various parts of the world.”

The Lord Bourne of Aberystwyth, Minister for Faith, addressed the congregation and Archbishop Angaelos with the warmest wishes and thanks, saying:

“The Archbishop has once again extended a hand of friendship to all. It is an honour to mark this holy day as a member of this congregation, which truly reflects the great pluralism and diversity on which our society rightly prides itself.”

The Lord Alton of Liverpool concluded the addresses by reading a message from the Prince of Wales, in which His Royal Highness commented on the growth of faith and strength in Coptic Christians both here in Britain and Egypt, subsequent to recent and past events. He also congratulated the Coptic community and Archbishop Angaelos on the newly established diocese of London, and sending his warmest wishes to the community.

The Lord Alton of Liverpool then gave his own personal message by concluding with:

“I have always been struck by the hidden treasures of the Coptic Church: inspired by its extraordinary and remarkable history, its beautiful liturgies, and by its contemporary work.”