Catholicos-Patriarch Dinkha IV: A fatherly figure and a role model for members of the Church of the East 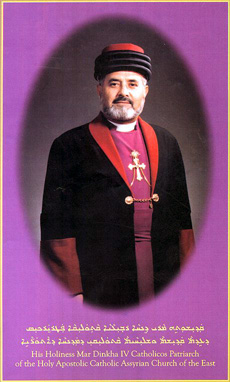 Chicago (AINA) — The Patriarch of the Holy Apostolic Catholic Assyrian Church of the East, His Holiness Khanania Dinkha IV, died Thursday at 10:04 AM at the Mayo Clinic in Rochester, Minnesota. The cause of death was a virus infection and pneumonia. The Bishop of India, Mar Aprim Mooken, will serve as acting patriarch until a new patriarch is elected.

Patriarch Dinkha was born in Iraq on September 15, 1935. He was ordained a priest on July 15, 1957 and appointed to the ministry in Urmia, Iran. He was consecrated as bishop on February 11, 1962. He became patriarch after Patriarch Eshai Shimun was assassinated in 1976.

Patriarch Dinkha is credited with rebuilding the church, which had neared the brink of destruction after the assassination of his predecessor. He translated portions of the liturgy from classical Assyrian (Syriac) to modern Assyrian and brought stability and peace to a church in turmoil.

Patriarch Dinkha was a warm, fatherly figure and a role model for members of the Church of the East. His yearly Christmas and Easter epistles would stress the national Assyrian identity of the three major Assyrian denominations — the Church of the East, the Chaldean Church of Babylon and the Syriac Orthodox Church. He enjoined members of the church to be faithful citizens of all countries in which they reside, and he would always be thronged by supporters wherever he visited. His most eternal message was that of ecumenism, which he was passionate about, and the desire to see all Apostolic Churches in communion with one another as equals, accepting each other’s sacraments and consecrations.

Under his reign, the Church of the East signed a Common Christological Declaration with the Roman Catholic Church, then headed by Pope John Paul II.

On September 16, 2008 Patriarch Dinkha conducted a prayer service at the Syriac Orthodox Church in Brussels. Citing the continuing attacks on Assyrians in the Middle East, he called for the establishment of an Assyrian-administered unit in Iraq’s Nineveh Plains and unity of Assyrians from different denominations.

The funeral service will be held on April 8 at St. George Church in Chicago.