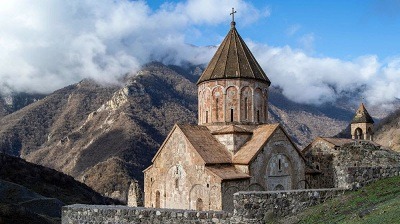 A Plea to Save Artsakh’s Armenian Heritage

Armenian history is marked by the endurance of faith.

As members of the first Christian nation [301 A.D.], we have faced centuries of persecution and the risk of total annihilation at the hands of our hostile neighbors. Through our faith in Jesus Christ, we have seen the resurrection and revival of our people and the continuation of our sacred lineage, always remembering the utmost value of human life and doing our best to protect it.

Artsakh – The ‘Heart and Soul’ of Armenia – An Appeal (Video)

But unfortunately, along the way, we have lost countless sacred places—churches and monasteries, cemeteries and monuments, sacred vessels and manuscripts—that have been the silent victims of conquest and war. They have disappeared from the map of human history, a lost piece of universal Christian heritage.

Today, one of the last remaining regions of our ancient culture is at risk of destruction. The land of Artsakh, known to the wider world as Nagorno-Karabakh, was at the center of a brutal war, an assault on its indigenous Armenian population. Our people have lived in this land for thousands of years, making it home to sacred sites and precious relics. According to our tradition, the 13th-century monastery of Gandzasar contains the head of St. John the Baptist. The Monastery of Dadivank contains the tomb of St. Dadi, a direct follower of St. Thaddeus, the apostle of Christ who was one of the founders of the Armenian Apostolic Church.

It was with the utmost pain in our hearts that we watched this land come under grave danger over the past six weeks. Thousands of people, soldiers and civilians, elderly and children, were lost as our heritage took a direct hit. On October 8, Azerbaijani missiles struck the Cathedral of the All Holy Savior in Shushi, twice in one day.

In the ceasefire that followed, a large part of the territory of Artsakh was handed over to Azerbaijan. This was the cost of preventing further loss of lives. With great courage and commitment, our soldiers did their best to protect their ancestral homes. But Azerbaijan, with its fierce arsenal of weapons and massive oil wealth, had the greater force. With the open support of Turkey and the involvement of Syrian mercenaries fighting on the frontlines, their assault was designed to overwhelm us.

With our communities and congregations now driven from the land, left behind are thousands of sacred monuments, a testament to our history and faith. What will happen to them next? I hope and pray that it will not be a tragic fate.

When I visited Baku ten years ago, within the framework of the Summit of World Religious Leaders, I went to visit what may be the last remaining Armenian church in the wider territory of Azerbaijan. Practically every trace of our culture had been removed from the building: the cross, bells, altar, baptistery, and frescoes were removed, and relics destroyed. There used to be many more ancient Armenian Christian sites across the country, but they were destroyed in the past several decades.

In the Dashkasan region of Azerbaijan, the Monastery of the Holy Translators, first constructed in the 4th century, lies in ruins.

After the region of Nakhichevan, historically home to a large Armenian community, was granted to Azerbaijan by the Soviet Union, the Armenian inhabitants were driven out and over 6,000 intricate cross stones were destroyed. A campaign of cultural genocide continued until 2002. All of this took place under the eyes of the civilized world, witnessed by researchers and photojournalists.

This cultural cleansing must not happen again.

During this war, we witnessed the hatred and the barbaric behavior of Azeri soldiers towards the civilian population of Artsakh, war crimes that have been documented in detail. We saw the vandalism towards our sacred monuments.

With that fresh in our memory, I have sincere doubts that the Azerbaijani authorities will protect Armenian Christian sites now under their control. Azerbaijan is solely responsible for preventing any form of vandalism or destruction of our church monuments, and for banning all attempts to deny our history or appropriate our culture.

I pray that the world will awaken to this call, standing up to protect this small piece of land and its significant contribution to universal human culture. My people fervently hope that institutions like UNESCO, Blue Shield International, and the Smithsonian Institution will play a role in maintaining our sacred sites in the condition they are today.

We call on the rest of the world to bear witness, to pray for peace and justice, and perhaps even to go see these churches themselves someday. (Many of them will be on display in a landmark virtual exhibit, soon to be hosted at the Museum of the Bible.) There are an estimated 4,000 historical monuments in the region of Nagorno-Karabakh; each of them has a powerful spiritual legacy to impart.

In these difficult days, I remember the enduring words of St. Paul in 2 Corinthians:

“We are hard pressed on every side, but not crushed; perplexed, but not in despair; persecuted, but not abandoned; struck down, but not destroyed.”

May we all live in peace and security. May the power of faith sustain all people and comfort those who are living through war and strife around the world.

And may the Holy Spirit of our Lord Jesus Christ inspire all people to express their highest level of kindness, compassion, and humanity to one another.

Catholicos Karekin II is head of the Armenian Apostolic Church.