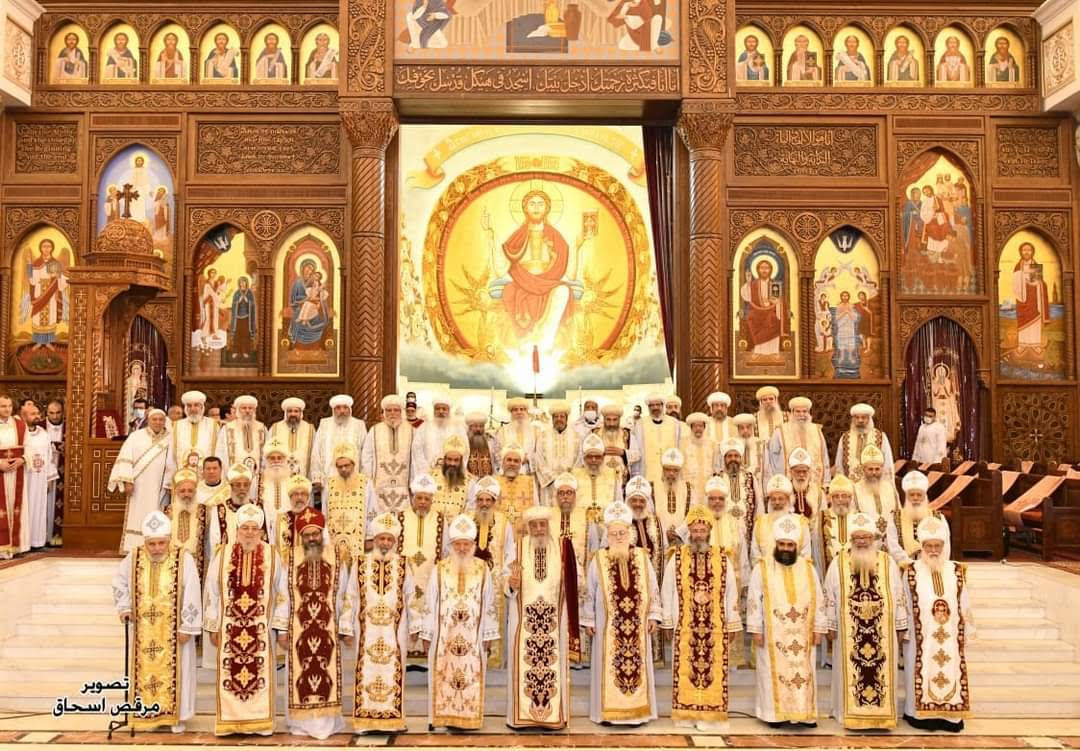 Cairo- Egypt: His Holiness Pope Tawadros II served the Divine Liturgy, on 17/3/22 of the third week of Lent, at St. Mark’s Cathedral in Anba Ruwais, on the occasion of the tenth anniversary of the departure of the late Pope Shenouda III, the 117th Patriarch, among the patriarchs of our Coptic Orthodox Church.

Twenty church rabbis, many priests, monks and large numbers of people participated in the liturgy. Pope Tawadros performed the elevation of 29 priests to the rank of Qumsieh on the occasion.

In his homily, His Holiness addressed three signs that distinguished the late Pope Shenouda III. Pope Tawadros stated that “today we celebrate a great Coptic ecclesiastical spiritual stature that influenced Egyptian and Coptic history, the late Pope Shenouda III, who was a lover of the Bible, of monasticism and the monastery, and of ecumenical relations with the churches of the world.

He pointed out the three signs that distinguished him, which are:
1- Education: Paid attention to education and explained the Bible and religious and theological topics in a simple and profound way.
2- Monastic reconstruction: He loved monasticism with all his heart, and he used to spend a great deal of time in the monastery.
3- Ecumenical relations: Our church was one of the first churches to participate in the World Council of Churches in Geneva, Switzerland, in the days of the late Pope Joseph II, and ecumenical work continued during the days of Pope Kyrillos VI, and Pope Shenouda III, who worked to establish the Middle East Council of Churches in Beirut, as well as the Council of Churches of All Africa, in Nairobi, Kenya. A few months before his departure, he began his consultations and preparations for the establishment of the Council of Churches of Egypt, and the council was opened about a year after his departure.

The Pope further stated that:

-The late Pope Shenouda III was the first Coptic Patriarch to visit the Vatican and establish relations with the Catholic Church, in May 1973. The visit resulted in an official statement signed by Pope Shenouda and Pope Paul VI. This statement is a strong foundation for the relations that exist between the two churches. On the basis of the statement, theological dialogues were established between the Eastern Churches (the Oriental) and with the Catholic Church. The strong fruit of all this is the mutual understanding between the two churches.

– He was interested in dialogue with the Byzantine churches, and this dialogue resulted in an agreement on the nature of Christ.

– He visited most of the world’s Orthodox Chalcedonian, non-Chalcedonian, Catholic, Evangelical and Episcopal churches and exchanged visits with them. He was interested in these good relations to bring everyone together and was interested in theological dialogues, loving visits, and receiving fathers and leaders of these churches here in Egypt and helped them learn the correct history of our Egyptian Church.

-He received the largest award in Christian education granted by Protestant institutions, given to him as a distinguished Christian preacher, and that was in the late seventies.

-The presence of the Pope, with his great experience in the Bible, the writings of the Fathers, knowledge of faiths, and his literary talents in history, poetry, and literature, all gathered in him and helped him and strengthened him in making our church in the theological dialogues have a place.

– He played an important role in making the Coptic Church a “beacon”, so that when it is present anywhere, it is not afraid of anything, but rather presents its experience, history, experiences, knowledge and straight faith to all.